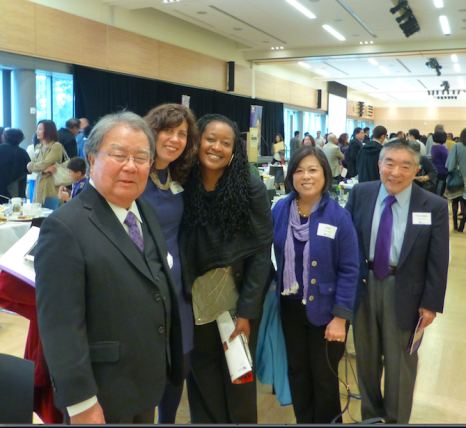 Students from American Ethnic Studies were well-represented at the 21st annual Multicultural Alumni Partnership (MAP) breakfast. MAP, which was founded in 1994 as a university group dedicated to the promotion of diversity at the University of Washington, hosts the breakfast every year as a way of honoring university and community leaders as well as recognizing student achievement with scholarships. At this year’s breakfast, AES professors Stephen Sumida, Sonnet Retman, and Gail Nomura all sponsored tables at the breakfast so that students in AES could engage with the larger university community.

Sumida, who has long been involved as both a supporter and board member of MAP, emphasizes the importance of MAP for students across UW. He explains that the board looks for compelling stories of need and achievement from potential scholarship students that may not be as well represented within the university. Sumida describes the MAP scholarship as a program that is not as interested in traditional markers of students success such as test scores, but instead seeks out the individual stories of students who contribute important experiences and perspectives to the campus community.

Both Sumida and Retman have generously offered their time to serve on the MAP board; Retman is currently serving as MAP’s secretary and plays a crucial role in building support and interdepartmental involvement in the program and its events. In Sumida’s view, AES faculty are able to bring academic practices and insights into diversity that help to enrich the MAP board in its enactment of programs that support student development.

Over a dozen AES students attended the breakfast this year. Though no AES students received scholarships this particular year, they all still saw the event as a very important social and networking opportunity. They had a chance to meet leaders on campus and see potential roadways to support their education. Sumida thought it was important to show students the strong bonds that link MAP and AES together as programs dedicated to increasing diversity at the UW and supporting the success of student perspectives that truly enrich the campus community.