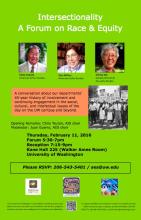 On April 16, 2015, then Interim President Ana Mari Cauce gave a talk on diversity, equity, and difference at the UW’s Intellectual House that established what is now known as the Race & Equity Initiative. With hard won insights that she formed during her 29 years at the UW, the President admonished everyone to do what they could to address the challenges we face collectively: “We may not be able to solve racial inequity, and all those other forms of ‘isms’ everywhere in this country or in the world, but we’ve got to begin by not being part of the problem.” As important as it is to acknowledge the personal consequences of discrimination and bias, Cauce declared that of even greater concern “are the effects of what is called systemic or institutional racism, the biases and barriers that diminish our capacity as a society, or in this case, as a university, to truly fulfill our public promise of both access and excellence, indeed of access to excellence.”

More recently, in tandem with Ed Taylor, Vice President and Dean of Undergraduate Academic Affairs, UW Provost Jerry Baldasty issued a report titled “Leading Change in Public Higher Education” that highlights “examples of people and programs that inspire us to take action against bias and to work for equity in our personal and professional lives.” Among the many links it provides for resources on campus was one that featured an overview of the Race & Equity Initiative, which includes a lecture series on issues of race and equity hosted by the Graduate School and the UW Alumni Association. Because the issues that the President and the Provost have raised are important to us all, the chairs of American Ethnic Studies, American Indian Studies, and Gender, Women & Sexuality Studies met recently to discuss ways in which they could collectively join the chorus of voices that have been organized to address these issues.

After reflecting on the options available to them, the three chairs decided to sponsor a “Forum on Race & Equity” that would focus on the role each of their departments has played in providing students on campus with the critical tools they need to engage in the difficult conversations that we must all participate in as a consequence of the many social, cultural and political challenges we all face. When they realized that the various programs that eventually evolved into the three departments they administer were all founded around 1970, the Chairs also decided to use the forum as an opportunity to celebrate the 45th anniversary of demonstrations by the UW Black Student Union and other groups committed to difference and diversity that resulted in the creation of their three departments and the important work each has undertaken to address the academic and social needs of historically underserved students at the UW. In addition to looking back at their departments’ involvement in issues related to race and equity, the Chairs plan to use the forum to reflect on the current status of their departments and to look forward to what the future holds.

The “Forum on Race & Equity,” sponsored by the Departments of American Ethnic Studies, American Indian Studies, and Gender, Women & Sexuality Studies, will take place on Thursday, February 11, 2016, at 5:30 pm at the Walker Ames Room in
Kane Hall followed by a reception at 7:15 pm.The event will begin with a conversation among former AES chair Dr. Lauro Flores, AIS faculty member Dr. Dian Million, and GWSS interim chair Dr. Shirley Yee. This conversation will be moderated by current AES chair Dr. Juan Guerra. To engender more involvement, Guerra will pose a series of questions about each department’s past, present, and future, and will then have the three departmental representatives engage in a conversation that we hope will provide a series of intertwined stories about the difference each of the departments has made on the UW Seattle campus in particular. The speakers will then entertain questions from the audience. There will also be a reception afterwards that we hope will encourage attendees to continue the conversation in a spirit of friendship and camaraderie. We look forward to seeing you there!