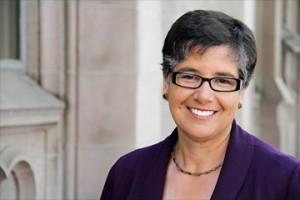 In a jubilant victory for anyone who has supported her in the many administrative roles she has held as Chair of American Ethnic Studies, Chair of Psychology, Executive Vice Provost, Dean of the College of Arts & Sciences, UW Provost, and Interim UW President, the UW Board of Regents selected Dr. Ana Mari Cauce as the 33rd president of the University of Washington on October 13th. Cauce, who served as the chair of AES from 1997 to 2000 and remains a professor in the department, made history as the first woman, person of color and openly-gay individual to serve as UW president. Those of us who attended her first talk after she was appointed President were thrilled by the standing ovation that the overflow crowd at the Intellectual House gave her when she was introduced for the very first time as the University of Washington’s newest president.

Throughout her career, Cauce has always championed programs that support faculty, staff and student diversity. Her stance on social justice issues was cemented in April 2015 when as Interim President she delivered a rousing address about racial equity on campus that signaled a commitment by the university’s leadership to establish and nurture a welcoming atmosphere on campus for all forms of difference and diversity and by directly addressing the concerns of students of color not just at the UW but on a national level. In implementing a Race & Equity Initiative that encompasses the Seattle, Tacoma, and Bothell campuses, President Cauce and the UW’s leadership team declared their ongoing support to open access for, as well as the academic success of, underrepresented and underserved students interested in attending the university.

As we report elsewhere in this issue of All Eyes on AES, the Race & Equity Initiative includes a lecture series, facilitated conversations, increased teaching support around questions of diversity and bias, student roundtables, increased online resources for students, as well as training and outreach for faculty, students, and community partners. According to the UW Provost’s Report on Race and Equity, the initiative will “empower and inspire our community to seek greater understanding across differences.” As an educator, leader, and mentor, Cauce has established a strong legacy of commitment to difference and diversity over the course of her 29 years at the UW, one that will no doubt continue to grow in her capacity as UW president. AES faculty, staff, students, and their allies in the community congratulate President Cauce on her appointment. We look forward to her leadership as a president truly attuned to the needs and rights of an increasingly diverse faculty, staff, and student body.