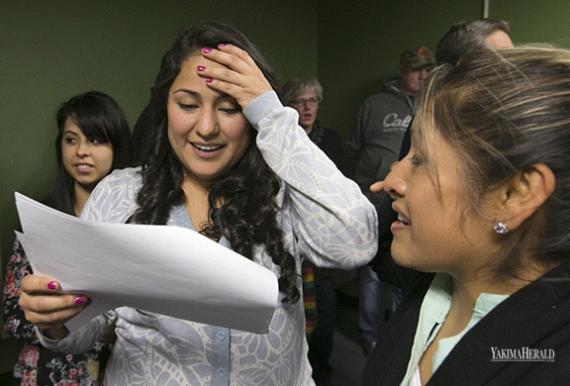 In a historic election, Yakima Valley has elected three Latinas to their City Council. One of these new council members is 2014 AES graduate Dulce Gutierrez. Gutierrez was born in the economically disadvantaged area of East Yakima that includes a majority Mexican-American population. After receiving a scholarship through the Bill & Melinda Gates Foundation, Gutierrez became the first woman in her family to attend college.

At the University of Washington, Gutierrez became deeply involved with on-campus programs and initiatives and succeeded as a student in AES. Driven by a desire to apply her education in the program into improving her hometown and her local community in East Yakima, Gutierrez never lost sight of her goals after she returned to the Yakima Valley and started working as an operations manager for Yakima Valley Hops. In 2015, after the city adopted a resolution to establish a district election system, she decided to campaign and run for City Council as a representative of the East Yakima district.

On November 3rd  of this year, she made history after successfully winning Yakima’s District 1. In her district, Gutierrez received 80.8% of the votes. This election also marked a 48% increase in voter turnout for the East Yakima district, an increase that was particularly strong among Latino voters. Gutierrez was joined by two other Latinas who were also elected to the City Council from new districts.

Dr. Erasmo Gamboa, who worked with Gutierrez when she was a student in AES, played a critical role that contributed to the election by serving as an expert witness on behalf of Latino voters in the Yakima Valley and arguing that Yakima needed to set up new voting districts in the community to provide greater opportunities for the election of a broader constituency. In Gamboa’s view, the election of Gutierrez and the other Latinas was a "political game changer” for a community that has historically been underrepresented and underserved in the Yakima Valley.

Dr. Connie So remembers Gutierrez as her student in AES 150. So describes her as a student with a passion for social justice who always spoke out on behalf of the underrepresented. So believes that Gutierrez will be a remarkable asset to the Yakima community at large, saying, “I know she's aware of the history of how actions toward one group impact another group. She is sensitive to cultural issues and can work with multicultural groups. She is energetic, intelligent and passionate about civic issues. I think all City Councils need people with these qualities.”

Gutierrez has values centered around her hometown and neighborhood community in East Yakima and, for her, this victory is a victory for them. Through her role on the city council, she will be able to represent a group of people that has not had someone who can speak for them in the past. These values are present even on Gutierrez’s campaign website, which is fully bilingual in both English and Spanish to better reach her district’s readership. As a council member, Gutierrez’s priorities for her district include public safety, economic development for local businesses, and increased opportunities for youth through after-school programs to retain higher graduation rates and deter crime in the neighborhood.

Dulce Gutierrez was sworn in as a member of the Yakima City Council on December 5th along with Avina Gutierrez and Carmen Mendez, the other two Latinas who won City Council seats. With their election, the new Yakima City Council now has a majority of women. For voters from the Valley, this is not just a political game changer, as Gamboa describes it, but a social and personal one for the many Latinos and Latinas in the Valley. AES congratulates Councilwoman Dulce Gutierrez and looks forward to celebrating the work that she will do in support of her community.