Preparing Our Students as Writers 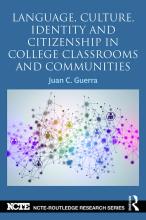 During the 25 years he has been a faculty member at the University of Washington, Dr. Juan Guerra, our new AES chair, has addressed the varied needs of historically underrepresented students who face challenging obstacles in their writing as they transition from high school to college. Much of the scholarly work he has done as a UW faculty member is informed by the 16 years he spent as a lecturer in basic writing at the University of Illinois at Chicago where he was charged with intervening in the writing lives of students from some of Chicago’s lowest-performing public schools. More recently, in collaboration with a colleague at the University of New Mexico at Albuquerque, Guerra has developed an approach to writing that acknowledges the rich linguistic and cultural resources students of color bring to the university from their varied communities of belonging. This legacy of commitment to scholarship and pedagogy is at the heart of his new book.

A part of the National Council of Teachers of English’s Research Series co-published by Routledge and NCTE, Language, Culture, Identity and Citizenship in College Classrooms and Communities takes up questions of how instructors can help their students develop a new orientation toward their writing through what he calls the critical practice of transcultural repositioning. Guerra defines the concept as the rhetorical ability disenfranchised students in particular have learned to enact as they move back and forth across “different languages and dialects, different social classes, different cultural and artistic forms, different ways of seeing and thinking about the increasingly fluid and hybridized world emerging all around us.” Guerra argues that it is the responsibility of every university to establish a Writing Across Communities initiative that provides all students, but especially the disenfranchised, with a campus-wide program that builds on the repertoire of rhetorical practices they bring to college.

As a longtime writing instructor, and as a faculty adviser and administrator in both English and American Ethnic Studies, Guerra is uniquely equipped to devise pedagogical approaches that support historically underserved populations throughout the university. Guerra seeks to show students the inherent value in the linguistic and cultural knowledges they bring to their classrooms. As Guerra explains, “this book builds on what we’ve learned about how best to address the curricular and pedagogical needs of disenfranchised students reflected in initiatives informed by Basic Writing and Writing Across the Curriculum.” He picks up on the importance of acknowledging the languages in motion that students bring to their writing—including code-switching and code-meshing. The book also engages the concepts of cultures in transition and identities-in-practice, and the role they play in cultivating what he describes as citizens in the making, to explore the varied ways in which historically underrepresented students position themselves through their writing practices in the classroom and beyond.

Although the book has only been available for two months, some reviewers have already had an opportunity to comment on it. One reviewer reported being “impressed and compelled by the theoretical frame offered here as well as the case studies that illustrate this theory at work, by the depth of his thinking and the ways it usefully complicates current theories in seeking to understand how students and teachers can make sense of their lives and educational experiences. I see this project making a necessary contribution to the thinking currently happening in our profession around difference and its significance in classrooms.” Another reviewer praised the book as “timely, provocative, and responsive to the changing demographics of this country and its institutions of learning. I think there will be a receptive audience in rhetoric and composition to this work.”

In reflecting on the many years he spent working on the book, Guerra expressed delight in the opportunity it gave him to think and write about his own personal experiences growing up in a linguistically, culturally and socially segregated community in south Texas in the pre-civil rights era as well as the more than 40 years he has taught writing in university settings. “Each of our lives,” he said, “is profoundly entangled with the personal and historical moments we witness and especially with how we respond to them. Writing this book gave me an opportunity to think through how we can best prepare our students to engage the world on their own terms.”

Click here for a peek inside Dr. Guerra’s book.