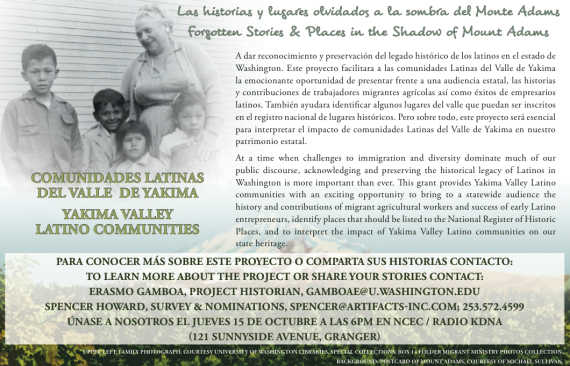 In a project funded through the State Office of Archeology and Historic Preservation, Dr. Erasmo Gamboa is drawing together a group of AES students to embark on an ongoing initiative to collect the stories of Latino/a residents of the Yakima Valley.

Gamboa is working on the grant in partnership with Granger’s Radio KDNA, Toppenish’s Heritage University, and the preservation firm Artifacts. Together, they are creating an accessible electronic map that inventories over 40 sites of historical significance throughout the diverse communities in the Lower Yakima Valley. By creating this map, they hope to preserve the rich and underrepresented history of Latinos in the Valley. Although the project currently focuses on history from the 1930s to 1960s, Gamboa hopes to secure a second grant that will allow his team to seek contemporary histories.

In addition to identifying these locations, the project also seeks to collect oral histories that will, in Gamboa’s words, “bridge the stories to the real significance of these places.” In addition to interviewing these current and former residents of the Yakima Valley in order to secure their individual histories, Gamboa and his team of AES students will be creating an archive of photos of their historical informants. Eventually, these maps and interviews will form an exhibit in the Sea Mar Latino Museum and Cultural Center that is currently being constructed in South Seattle. The exhibit, which should be completed by Spring of 2016, will initially be shown in Granger and then tour the state of Washington.

Gamboa has recruited students from his current Chicano Studies 200 and 254 courses to take part in the project. He will eventually form a team of 5 to 10 AES students who will be trained in interviewing in order to do local field work and seek the stories of Latinos and Latinas from the Yakima Valley who have settled in the Seattle area. Students from Heritage University will similarly document the stories of longtime residents of the Yakima Valley. Gamboa hopes that AES students will present their ongoing work at the UW undergraduate research symposium in spring of 2016. The project, Gamboa believes, will give AES students an opportunity to bridge what they learn in the classroom with what they learn in the community.