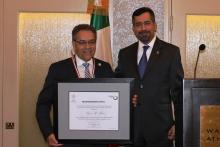 On May 5th, 2016 the Consul of Mexico in Seattle, Eduardo Baca, presented the "Ohtli" Award to Lauro H. Flores, prominent professor and fellow at the University of Washington, and leader of the Mexican community in the state of Washington.

The award ceremony took place within the framework of the celebration of 5 de mayo in Seattle. Professor Flores was joined by members of the University of Washington, other academic institutions in the Northwest, distinguished members of the latino community in the Puget Sound, as well as family members.

On behalf of the Government of Mexico, Consul Baca highlighted Professor Flores´ achievements throughout his career, including over 35 years as a professor at the University of Washington, an institution for which he has been an invaluable academic and promoter of Mexican, Mexican-American and Latin American culture, literature and art in the Pacific Northwest.

"Lauro Flores is a vital player in the academic and artistic community in Washington and the Northwest region of the United States. He has made important contributions to the field of Chicano studies and the cultural links between the U.S. and Latin America. As well, along with Mexican and Mexican-origin artists residing in the region, he has built an invaluable artistic legacy in the Pacific Northwest that makes all Mexicans extremely proud," said the Consul of Mexico during the ceremony.

Professor Flores has held numerous positions including Director of the Center for Chicano Studies, Head of the Latin American Studies Program, and Director of the Department of American Ethnic Studies. He is a specialist in Chicano Literature and Culture, as well as Latin American Literatures, and Visual Culture on which he has written, lectured and published extensively both in the U.S. and abroad.

Additionally, Professor Flores has been a tireless promoter of arts and artists that link Mexico and the Pacific Northwest. In this work he has been curator of more than a dozen art exhibitions that go from Washington to Mexico and Spain. Most recently, he curated the exhibition Beyond Aztlan: Mexican & Chicana/o Artists in the Pacific Northwest, currently on view at the Museum of Northwest Art in La Conner, WA.

In bestowing the award on this year´s honoree, Consul Baca said, “We honor Lauro H. Flores for relentlessly leading Mexicans and Mexican-Americans through a path of higher learning, better understanding and artistic expression. His selfless work and deep commitment to these goals have made a difference in the livelihoods of many, and continues to do so, not only through education and his contributions to researching and documenting the Mexican-American experience, but also in building strong binational bonds through the arts”.

The "Ohtli" Award, which means "path" in the Nahuatl language, is the highest recognition granted by the Government of Mexico to the members of Mexican or Mexican-origin community in the United States who have made exceptional contributions to the development of the Mexican community abroad.