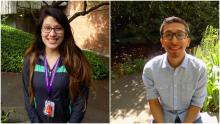 Jannette Gutiérrez and Carlos Vargas have worked throughout Winter and Spring quarter to collect interviews with Latino/a residents of the Yakima Valley. 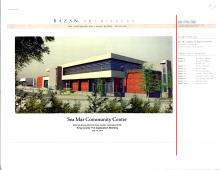 Professor Gamboa has provided a preview of the Sea Mar Community Center, which will eventually exhibit the research that Gutiérrez and Vargas have completed.
View gallery

Professor Erasmo Gamboa has provided an exceptional opportunity to several AES students by inviting them to work on his oral history project of Latino/as from the Yakima Valley. Gamboa’s project collects stories and photos from Latino/a residents of the Yakima Valley from 1930 to 1960. These stories are being collected in part to create a map of sites of historical significance to the Valley, but also to create a museum exhibit for the Sea Mar Latino Museum and Cultural Center that is currently being constructed in south Seattle. Two students, Carlos Vargas and Jannette Gutiérrez, were able to provide some insight into the work that they’ve been doing on the project for the last two quarters.

Vargas is a Senior double majoring in AES and Communications with a minor in Spanish, while Gutiérrez is a sophomore pre-Dental student majoring in Spanish. Both students have ties to AES through Gamboa’s Chicano Studies courses. Most importantly for their research, both students have ties to communities in Eastern Washington. Gutiérrez has lived in several towns across the eastern side of the state, but considers herself a native of East Wenatchee. Vargas, on the other hand, is from the Yakima Valley—the subject of his work on the project. He grew up in Sunnyside and has been thrilled to have an opportunity to reconnect with the history of his community.

Thus far, both Vargas and Gutiérrez have been interviewing current Seattle residents who lived in the Yakima Valley. For the project, the students are working in small groups to schedule and record their interviews. Both students jumped at the opportunity to be involved in the project from the moment that Professor Gamboa described the work to them in a Chicano Studies course during fall quarter.

Throughout the process, both students have been amazed by the histories that they have uncovered through their interviews. Not only have they been able to engage with the larger Latino community in the Seattle area that is not always acknowledged, they have also developed new insights into their own histories as children of Mexican immigrants from Eastern Washington. As Gutiérrez explains, “It’s been so interesting because they’re all from the Yakima Valley and a lot of their experiences, I can kind of see that happening where I’m from. Looking back to stories from my parents and grandparents, I can see so many similarities. It’s been so interesting to be able to record that.”

The most important part of the experience has been recognizing the importance of these histories for young Latino/as and Chicano/as from the Valley. Vargas describes how he often felt a lot of pressure to assimilate while he was growing up in Sunnyside and thought that having a Mexican background wasn’t something to be proud of. Gutiérrez adds, “I know a lot of people here at the UW who have grown up not knowing their culture. I feel like this will give them a sense of who they are, and it will help them to develop their identity because knowing your past helps you for your future.” For Vargas, the experience has been an “eye opener.” He explains that many young people from Eastern Washington “don't see how dominant the Latino community is until we leave it.” This project has given him the opportunity to not just learn his own history, but to provide a record of it for his community.

As the mother of a young daughter, Gutiérrez is fully aware of the strength of projects like this that connect Latino/a students to their culture and history. Vargas has similarly connected to the human element of getting to know people from his community and emphasize a history that has often been overlooked. Vargas sees this kind of recovery of history as powerful because, as he explains it, “When you start highlighting one minority group, people start noticing. Our project has inspired other groups and other ethnicities.” Both Vargas and Gutiérrez see their work in this project as a part of the process of recovery of cultural histories that have been neglected. They both look forward to sharing their work with their friends and families when their interviews are compiled in the Sea Mar exhibit as a way of celebrating not just their own accomplishments, but the strength and history of their community.