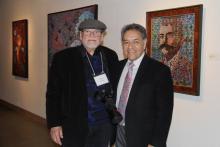 Professor Lauro Flores with painter Alfredo Arreguín at the opening of the "Beyond Aztlán" exhbit at MoNA. Photo credit: Latino Northwest Communications. 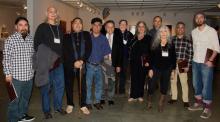 After years of laying the ground for it, Professor Lauro Flores recently saw the opening of his curated exhibit at the Museum of Northwest Art. The exhibit, titled “Beyond Aztlán: Mexican and Chicano/a Artists in the Pacific Northwest,” has draw together a collection of work by fifteen visual artists with ties to the Northwest. Directors of the MONA contacted Flores two years ago inviting him to assemble an exhibit on the basis of his work as a historian of Pacific Northwest art. As Flores explains it, the opportunity to curate the exhibit gave him a chance to bring these artists together and tell a coherent story about their work to the public.

For Flores, this exhibit is a chance to expose the rich history of Mexicans and Chicano/as in the Northwest. He thanks the MONA for being one of the few institutions willing to step forward to take on the task of showcasing this history and the rich art that exists as a result of the history of Mexican migration to the Northwest. Flores explains that the common perception of Mexican and Chicano/a art is very limited and that he curated the exhibit in the hopes of demonstrating the breadth and diversity of expression in contemporary artists.

By invoking the title of Aztlán, or the legendary place of origin of the Aztecs, Flores has situated these artists not just in a Mexican lineage but also connects them to a history of Chicano/a activism and art. These artists are strategically positioned as bringing this history into the present and well into a future by way of cultural expression through visual media.

The exhibit features a diverse array of styles and perspectives, including collage, drawing, painting, photography, and sculpture. Flores explains that the works included “epitomize the diversity of our community and the range of interests and activities that have defined the evolution of a Chicano/Mexican aesthetic expression in the Pacific Northwest over the last sixty years.” Some of these artists were born in Mexico and migrated to the US, while others moved here from other US regions. Only two of the artists feature—Paul Berger and Daniel DeSiga—are natives of the Pacific Northwest region.

Flores hosted the opening of the exhibit on March 26th to a large audience with many of the artists present to showcase their work. Flores sees this exhibit, and the opening event, as an opportunity to lift up many artists that have produced immense work that has often been overlooked or underappreciated. He points out that while an artist such as Alfredo Arreguín has had work featured in national galleries, he is still under recognized by museums in the Seattle area that he calls home. “Beyond Aztlán” is a welcome opportunity to raise the profile of many talented artists and establish their history as part of Northwest culture.

The “Beyond Aztlán” exhibit runs through June 12th at the Museum of Northwest Art in La Conner, WA.

For more information about the MoNA and "Beyond Aztlán", visit their site here.