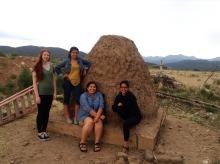 The UW students, including Rocio Carranza, who constructed an horno (adobe oven) in 2014.

The University of Arkansas Press is publishing a major new book, Mexican-Origin Foods, Foodways, and Social Movements: A Decolonial Reader as a volume in an exciting new series on Food and Foodways edited by Dr. Jennifer Wallach. The book includes sixteen original chapters and was assembled and co-edited by AES Professor Devon G. Peña in conjunction with Dr. Luz Calvo (California State University-East Bay), Dr. Pancho McFarland (Chicago State University), and one of his graduate students, Gabriel R. Valle. The book explores the rise of the food sovereignty and food justice movements as part of the struggles of Mexican-origin peoples north and south of the border. The unique group of authors includes farmers, urban gardeners, community and labor organizers, chefs and cooks, and scholarly researchers with a history of activism in the environmental and food justice movements. Following the founding traditions and values of Chicano/a Studies, Peña’s work has always involved an exercise in collaborative social action oriented research designed to empower and defend our communities. The new book reflects these concerns.

The invitation to develop this book came from Dr. Wallach, but the path Dr. Peña followed to produce this work was a much longer one. Since 1999, Dr. Peña has served as a professor at the University of Washington with a joint appointment in American Ethnic Studies and Anthropology. Before arriving at the UW, Dr. Peña was an Associate Professor at The Colorado College (1984-1998); it was there that he first developed ties to the Chicano/a farmers of the San Luis Valley. As a result of these ties, he was invited by farmers in the community in 2005 to acquire an acequia (communal irrigation ditch) farm in the bottomlands of the historic San Luis Peoples Ditch (1852), the oldest water right in Colorado.

Professor Peña became interested in working on this book as a result of his own research on the heritage cuisine of Chicano/as in the Río Arriba and on the acequia farm that Peña manages and works in Viejo San Acacio, a Chicano/a land grant village established in 1853. The farm produces organic alfalfa and hay and maintains a seed library centered on the “Three Sisters” (native corn, bean, squash), all of which are crops featured in the book’s many recipes and discussions. He became active in the preservation of these native crops of the bioregion and especially the native white flint corn that is cultivated by the acequia farmers in south central Colorado and northern New Mexico. The local flint corn, known as maíz de concho, is used to make chicos del horno (adobe oven-roasted corn), which is a winter store food that preserves the corn for years for use in homemade stews.

Since 2007, dozens of UW students have studied and interned at the farm with grant support from Peña family’s foundation, and many have received fellowships and paid internships to revive and sustain the unique bioregional heritage cuisine and necessary cultivation of traditional native crops used in the recipes. One of the students involved in Peña’s research is Rocio Carranza, who is double majoring in AES and Environmental Studies at the UW. Carranza was granted an internship through the Acequia Institute to perform her own research and advocacy in the San Luis Valley. “My research in the San Luis Valley,” Carranza explains, “played a huge role because the book discusses food security and food sovereignty, something that is very prevalent in my research. The research showed that food security is decreasing, it is becoming more urgent to protect unique resources around the world. Policy also plays an important part in order to reach a solution, but it was also evident in the importance of engaging the community at a local level in order to succeed. Ultimately, my research in the San Luis Valley can be seen as a model for other 'Center of Origins' wanting to ban GMOs, for equitable food systems, and for biodiversity.”

The book, to be published no later than September 2016, will be a vital resource for classes that Professor Peña teaches at UW including CHSTU 320 (Food Sovereignty) and ANTH 361 (Anthropology of Food). The authors have produced an interdisciplinary set of works that range from autobiographical essays on growing, eating, and sharing food to a critical analysis of the history of soil science and the erasure and resurgence of indigenous knowledge.