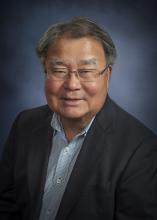 Professor Stephen Sumida sits in the same office that he once occupied as a graduate student. Years passed between Sumida receiving his PhD in English in 1982 and then returning to teach at the UW in 1998, but it seems that he and his office were meant to be together. When Sumida finally vacates the office in June, retiring after 18 years as an AES professor and after a long career as a pioneer of Asian American literary studies, the office will be left without its most important tenant.

After receiving his doctoral degree from the UW, Sumida spent many years teaching around the world. He was a teaching fellow in Kyoto, Japan, and he taught for many more years at the University of Hawai’i and at Washington State University before finally returning to his old office and his old academic home: the UW’s Department of American Ethnic Studies.

What will he miss the most about teaching here at UW? That’s easy. “The students, of course. After all,” Sumida explains, “when it comes to the things that I’m studying, the students are the ones in dialogue with me about this. They are the people I talk to. That’s true for most of us.” Sumida is a dependable professor who is well-known for his passionate commitment to his subject, his depth of knowledge, and his tendency to name drop all of the writers that he personally knows in his field of study. He believes that the closeness of his field and his deep knowledge of it is a benefit for students. As he puts it, “Students see we know all these people on a first name basis because we are tight communities and we interact with each other.” This community then extends into his classroom.

Sumida recognizes that the crux of his work as a professor in AES has always been to help students learn how to read their literary texts and characters as they are associated with race, ethnicity, class, and gender. This is what he sees as the foundation of an AES perspective.

In his retirement, Sumida is looking forward to spending time with his wife, Professor Gail Nomura, and their grandchildren. Additionally, he is also looking forward to the opportunity to continue his second passion: theatrical acting. Sumida notes that he has been lucky to have had a steady string of roles in local theater productions over the last five years. His next role in The United States of China will debut in June. He is also looking forward to a production of the The Tale of the Heike, which he is currently helping to adapt for the stage. For Sumida, the opportunity to act in local productions is a natural extension of his interest in community development and in emphasizing the public power of literature for his field and for his students. The theater is also, as he describes it, a space to keep learning. “Theater,” Sumida explains, “is one of the places where I don’t teach, I take direction.”

Alhough he is finally vacating his Padelford office, UW students will always have an opportunity to see Professor Sumida perform and engage the community in the ways that he’s valued throughout his 40-year career.