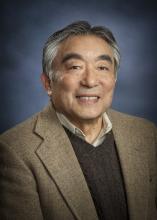 Professor Tetsuden Kashima, who is retiring at the end of spring quarter after 39 incredible and productive years as an AES faculty member, has made his mark with several remarkable projects for the UW and the wider Seattle community.

In 1997, Kashima played a crucial role in introducing the yearly Day of Remembrance at the University of Washington. This day commemorates President Franklin D. Roosevelt’s signing of Executive Order 9006 on February 19, 1942. This Order removed nearly all persons of Japanese ancestry from their homes and moved them into internment camps. In 2008, Kashima also helped organize The Long Journey Home event, which led the UW Board of Regents to bestow honorary degrees upon the 449 Japanese American students that had been removed from their studies at the University of Washington in 1942. The honorary bachelor’s degrees the students were awarded made them truly, and finally, UW Huskies. This change of status was also commemorated in the 2008 UW commencement ceremony. Kashima was also a force in honoring Professor Gordon Hirabayashi, a UW sociology senior who was jailed after refusing to be interned in 1942 and was posthumously awarded a Presidential Medal of Freedom in 2012 by President Barack Obama for his courageous act of defiance. Students can now see the medal housed in the UW Library Special Collections department as a symbol of what the students here at this university are capable of doing.

Professor Kashima’s work and contributions to the AES department, as well as the UW, have been both significant and invaluable. However, he emphasizes that the whole community at the UW is what has made his time here so memorable and productive. According to Kashima, “These projects are not the work of a single individual. They involved the entire university community, students, staff, faculty, and administrators. In my mind, the university’s job is to enlighten our students and our nation to events that have not received proper attention and to make places of academic learning more beautiful that they already are.” As a longtime professor and pioneer in Asian American studies, Kashima has helped foster a community that is able to make members of this community feel more empowered.

After his retirement this quarter, Kashima looks forward to traveling with his wife as well as continuing work on two book projects, one of them the continuing development of his 1972 dissertation on the role of Buddhism in the United States. As his work as a scholar comes full circle, Kashima reminds us that none of his accomplishments were individual endeavors. His gratitude and appreciation for the support he has received from the UW community is made palpable as he recounts every one of his incredible projects completed in service to the UW and Japanese American communities.

As he steps away from his longtime service to UW, he is also looking forward to the future of AES and the UW beyond it. He’s valued his time here at the UW and in AES because of the immediacy of the issues that the department in particular has engaged. As he explains, “We professors do it because education is so important and we need to encourage the next generation to take our place.”

While he has traveled widely and has been recognized on a national level for his accomplishments, Kashima’s heart and mind are clearly situated on the UW campus. Just recently, Kashima completed a beautifying project of 34 cherry trees gifted by Japan to the UW campus. These young cherry trees were given to the UW to commemorate the peaceful and productive relationship between the UW and Japan in research and friendship. As Kashima explains, “The university’s job is to enlighten our students and our nation to events that have not received proper attention and to make places of academic learning more beautiful than they already are. I look forward to hearing that our university continues this endeavor to discover and to teach about things that help to enlighten our American people, but especially our students. There’s no need to talk about the beauty of the landscape and the flora and fauna of the UW. This beauty is already a recognized fact, but blossoming cherry trees are always welcome and the more, the more beautiful the campus becomes.”