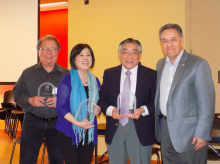 On Friday, May 6th, various members of the University of Washington community and beyond gathered at the Samuel E. Kelly Ethnic Cultural Center for the first American Ethnic Studies research symposium titled “Toward Transdisciplinary Perspectives.” The event marked the 30th anniversary of the establishment of AES as a department and the 45th anniversary of the founding of three programs that eventually joined together to become the department: African American Studies, Asian American Studies and the Center for Chicano Studies.

Presenters and attendees at the event engaged in conversations about the direction of the field of ethnic studies and shared their views on a range of critical issues and disciplinary approaches. The day included presentations by faculty, graduate, and undergraduate students from a variety of UW departments from AES and GWSS to the Jackson School and Political Science. Presenters invoked their own distinct methodological and cultural dispositions toward scholarship as they grappled with critical questions that continue to shape ethnic studies as a field of study. The symposium also welcomed presenters and speakers from the UW Bothell, San Francisco State University, the University of California at San Diego, Western Washington University and Washington State University.

In his opening remarks, AES Chair Juan Guerra asked the crowd to consider the entanglement of ethnic studies with an array of other disciplines in the course of shaping new ideas through on-going conversations about race and ethnicity at the university and across the nation. Vice Provost for Faculty Advancement Chadwick Allen later implored all those gathered to make their voices heard and asserted that all of the good work being presented through the symposium should not just be contained within the university and academic journals, but should also be entered into public discourse and engagement.

In her keynote address, Professor Yen Le Espiritu, former chair of the Department of Ethnic Studies at the University of California at San Diego, offered her own engaging insights to an audience that included faculty, as well as graduate and undergraduate students, from an array of disciplines affiliated with the study of race and ethnicity. She reflected on her history as a scholar and mentor, and offered thoughts on the future of ethnic departments in a time of crisis related to funding and their status within the university. For Espiritu, American Ethnic Studies is not just a response to the needs of the cultural and historical imperatives of the moment, it is also “a way of seeing” that is carried on through its transdisciplinary connections. Her keynote address invited a lively discussion afterwards in which both faculty and students reflected on potential paths for ethnic studies as a discipline and as a driving force in the larger community surrounding the university.

At the end of the day, the department honored retiring faculty members—Professors Tetsu Kashima, Gail Nomura, and Steve Sumida—in a series of tributes, planned and unplanned, from faculty and students who have admired their work. The presentation of plaques and an address from Professor Lauro Flores became a sort of open-mic night for many members of the AES community inspired and driven by the work of these three influential members of the UW community. It was a fitting way to end a day of reflection and introspection. All in all, the AES Symposium proved itself a respectful celebration of the department’s past while still keeping an eye on a changing future.