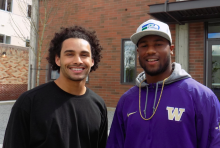 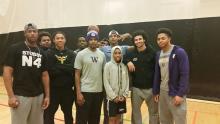 Azeem Victor and Dante Pettis have taken multiple American Ethnic Studies courses. They’re also star players on the UW Husky football team. Most importantly, to hear them tell it, they are both mentors to dozens of young students in south Seattle.

Listening to Victor and Pettis talk about their work through the AES Community Ambassadors Program is inspiring. The program, founded by AES’s Dr. Terry Scott and now in its inaugural year, has given seven UW student-athletes a remarkable opportunity to make a lasting mark on their community. Young students who are recommended to attend the mentorship program are students that have either already gone through the juvenile criminal justice system, or have been identified as at-risk students at their middle or high school. They are required to attend the mentorship meeting every Tuesday night at the Yesler Community Center for a few hours to meet, work, and talk with their mentors.

Pettis, who is a sophomore interested in both AES and creative writing, has taken multiple classes in AES that have left him considering not just his role as an athlete in the university, but also within the community. Victor, who is a junior majoring in AES, has taken courses that reflect the breadth of cultural histories that the department offers. In Victor’s words, AES courses give him an education in the missing pieces of history. He says that AES has given him “our version of history.”

Because they are interested and invested in community development as a consequence of their personal experiences and their work in AES classes, the mentoring program was of immediate interest to them. The mentorship program has given both Victor and Pettis an opportunity to give back to their community. By engaging with the at-risk middle and high school students enrolled in the program, they’re better able to understand the difficult conditions students face and gain insight into why they struggle socially and academically.

Although the internship program is available as an option to all AES students, Dr. Scott specifically invited students that were athletes at the university because of their special status in the eyes of young people who attend this after-school program. The mentors’ status as athletes has given them an easier time breaking the ice with young students by arriving in a ready-made leadership position. Naturally, both Victor and Pettis understand that their unique position as high profile athletes has provided them with an opportunity to build relationships with the young students in the program. Although the mentors have received a lot of attention because of their skills and profile as athletes, they don’t let the students think of them as different for long. As Victor explains, “Even though it may not seem like it, we still have a hard time doing homework and procrastination and stuff. We’re showing them you’re definitely not alone. You have someone here who sees what you’re going through and has probably been through that. The kids see that we’re down to earth. When we first got there, the kids saw superstars. As the weeks pass, they come to see that we’re just like them and they get comfortable. Then you really see how the kids feel. When you come around more often, it rubs off on them.” As mentors, they work hard to emphasize the things they have in common in an effort to engage students and show them alternate paths in their education.

And they’ve already seen results. Both Pettis and Victor were delighted to share stories of the kinds of improvements, big and small, that they’ve seen in the students they have mentored. Pettis describes a girl who has excitedly shared with the mentors how she’s worked to cut back on being tardy to class. Victor recounts a conversation with a student’s mother who has been hearing her son echo the specific advice provided by the mentors in the program. Some of the students have even started bringing friends who are not enrolled in the program because they think they might benefit from the guidance, as well as from the structured time and conversations with mentors who have already been there and can offer insight and support.

For Pettis and Victor, this program has provided the first of many opportunities to give back to their community and provide the influence that they grew to value when they were growing up. Pettis grew up seeing other young people who could have benefited from mentorship, while Victor identifies as someone who could have used a mentor like himself when he was in middle and high school. Both mentors recognize the importance and impact of a program that does something as simple as giving young people structured time and support once a week.

In April, many of the middle and high school students in the mentoring program were invited to attend the UW football spring game as a reward for their progress. Victor and Pettis were so excited to provide an incentive to the students that they were working with and to show them not just the value of their hard work on the field, but also to introduce them to the allure of the college campus and community. It was just another step along the way in developing a mentoring relationship that matters as much for Victor and Pettis as it does for the students whose lives they are shaping.