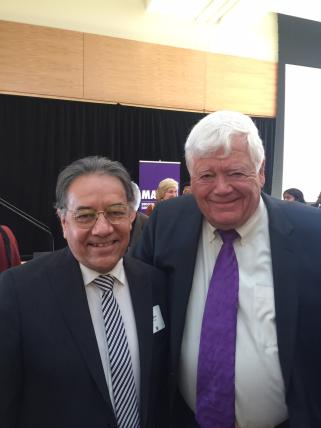 AES congratulates Professor Lauro Flores on receiving the Multicultural Alumni Partnership (MAP) Distinguished Community Service Award. Flores received the award at the annual MAP Bridging the Gap Breakfast held on October 22. According to Flores, receiving the award was a bit of a shock: “There are so many people that serve the university and the community well that it came as a total a surprise to me.”

The record, however, shows that Flores’s continuing contributions to both the UW and the Seattle community have been immense. Flores recently completed a 10-year term as chair in AES and has been a longtime faculty member in the department’s Chicano/Latino studies concentration. Recently, he agreed to accept a position as the acting chair of the Department of Spanish and Portuguese Studies. In accepting the SPS chairship, he returns to the department which first hired him back in 1980.

His work outside the university is also highly regarded. A prominent scholar of Chicano and Latino art and literature, Flores served last year as a guest curator for the Museum of Northwest Art and the exhibit Beyond Aztlan: Mexican & Chicana/o Artists in the Pacific Northwest. In honor of his many contributions to the larger community, Flores received the Premio Ohtli award in May 2016, the highest recognition granted by the government of Mexico to members of the Mexican or Mexican-origin community in the United States who have made exceptional contributions to the development of the Mexican community abroad.

In reflecting on the award he recently received from MAP, Flores notes that “a few of us provide the bridge between the campus and the extramural community, and I’m glad to be able to include myself in that group. The recognition is about the service that I have provided for both the community and the university, and for that I’m very appreciative.” For Flores, the best part of the breakfast was not the recognition of his own accomplishments and contributions, but the opportunity to see students being honored for the work they do at the university: “It’s always nice to see students receive scholarships. For me, that’s the real highlight of the whole thing.”