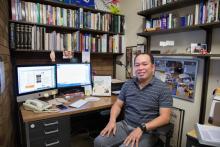 AES congratulates Professor Rick Bonus on his editorial appointment to the Asian American History and Culture (AAHC) book series for Temple University Press. Bonus, who has worked in AES since 1998, steps into the editorial role with a focus on social sciences, while other editors for the series focus on the humanities and history.

According to the AAHC series website, since 1991, the series “has sponsored innovative scholarship that has redefined, expanded, and advanced the field of Asian American studies while strengthening its links to related areas of scholarly inquiry and engaged critique. Like the field from which it emerged, the series remains rooted in the social sciences and humanities, encompassing multiple regions, formations, communities, and identities.” Bonus is thrilled to further contribute to the legacy of this book series in his new role as editor.

Bonus’ first book, Locating Filipino Americans: Ethnicity and the Cultural Politics of Space, was published through Temple University Press in 2000. In 2002, Bonus co-edited an anthology for the press titled Contemporary Asian American Communities: Intersections and Divergences. Over the years, he has enjoyed a strong relationship with the press and was recruited for the editorial position after the former editor stepped down. Bonus explains, “I’m stepping into big shoes here. The people who worked on the series were people I read as a graduate student and pioneers in the field, people I admire a lot. It’s strange but also feels good.”

As editor for the series, Bonus is well aware of his gatekeeper role within his discipline of social sciences and Asian American Studies. However, he recognizes that this responsibility will enable him to champion new scholarly voices and approaches. “I’m looking forward to shepherding fun, exciting books,” Bonus notes. “I’d be honored to have my name associated with a particular set of books, not to brag about them, but to assist in continuing to shape the field and continuing to enrich the field by providing old and new directions. That’s what I’m really excited about.”

Bonus also looks forward to the ways in which his editorial work will positively impact his own scholarship and enrich what he is able to bring to the AES department. Bonus explains, “I can imagine the infusion of new ideas that someone like me could benefit from and then bring to the department. These new ideas might even seep into the department if I can invite scholars I engage with through the press later as visiting speakers or visiting scholars. I want to offer those opportunities to the department because I’ll be the connection to the press.”