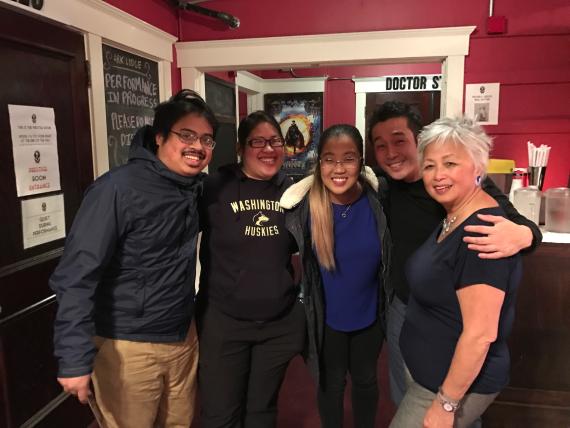 For the fourth year in a row, AES students were crucial in planning the Pre-Conquest Indigenous Cultures and its Aftermath (PICA) conference with the support of their faculty advisor, AES Senior Lecturer Connie So. The conference enables students to highlight the greater Seattle community in a program that provides opportunities for both student and community activism and artistry. This year’s theme, “[Ethnic] America: Through Our Lens," highlighted the history and contributions of Native Americans, Asians and Latinos in the US and the Seattle community through work in visual media. Held on November 11-13 and November 18th, the conference featured multiple film screenings, presentations, and dedications to community activists.

Each day of the event included films and presentations that focused on key topics valued by the student volunteer team. On November 11, for example, the conference examined the 1886 Seattle expulsion of the Chinese with a showing of Felicia Lowe’s Chinese Couplets and Kenneth Eng’s My Life in China. At the Wing Luke Museum, conference organizers honored Seattle veterans with the premier of Cathay Post #186: A Legacy of Camaraderie, Community and Patriotism, a documentary that focuses on Seattle’s Asian-American veterans group. At their reception on November 13 at Thien Phat Restaurant in Rainer Valley, conference organizers also previewed a film based on Peter Bacho’s novel Cebu and honored late Asian American activists Frank Fuji, Bob Santos, and Ruth Woo. The final day of PICA was held at the Burke Museum on November 18. This day focused on presentations from the Chinook and Duwamish tribes, as well as a free screening of The Promise Land documentary.

During the conference, attendees shared their concerns about the of the US elections on November 9 and reflected on the tremendous impact the elections are likely to have on local communities. As So explained, “the tone of the elections definitely affected the urgency of some of the conversations and what they meant for civil rights.” So also pointed out that many of the films screened during the conference not only commented directly on the anxieties of many PICA attendees but also fostered some optimism through the richness and importance of the stories they told.

Despite the difficult political climate, PICA remains a space for young student leaders to engage the community and practice the mission of the AES department by creating a space for the celebration of diverse communities. So reports that PICA had a staff of four student interns from UW that did work from creating fliers and press releases to organizing conference registration. Students were also in charge of food for the conference events, as well as booking rooms for the screenings and gatherings throughout the two weekends. The PICA conference also welcomed a group of high school students who gained community service credit through their involvement in the conference planning process. At the PICA conference, So explained, both student organizers and community attendees found “enthusiasm in the midst of a lot of uncertainty.”