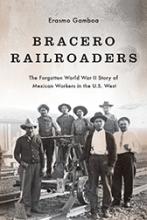 In September 2016, the University of Washington Press published Professor Erasmo Gamboa’s book Bracero Railroaders: The Forgotten World War II Story of Mexican Workers in the U.S. West. Gamboa’s new book serves as a follow-up to his 2000 book, Mexican Labor and World War II: Braceros in the Pacific Northwest, 1942-1947. Gamboa explains that “this book is less of a departure and more of a continuation, a fleshing out of the war period for bracero workers and their families.”

After his first book was published, Gamboa recalls a woman coming to a signing and asking about how his work would further encompass the experience of bracero workers. As much as she had enjoyed the book, she told him, it said nothing about her own father, who was a bracero railroad worker. Upon reflection, Gamboa considered that his is in part a response to the woman’s observation: “I want this book to reframe the way that Mexican and Mexican American and Latino labor is framed by a lot of scholars and the way that people stereotypically see Latinos as nothing more than agricultural workers. I hope to make people see that at least during the war, they were also key workers in the industrial sector.”

In his new book, Gamboa has taken care to focus on the stories of the families and wives of bracero workers as well. “It was interesting to me,” he notes, “to put a face to the men, but also to give a voice to the women. In the first book, I wrote almost exclusively about the men and forgot the women that were left behind. In this book, I tried to point out how the absence of the men impacted the gender roles in Mexico. It’s not that the women’s lives were altered but one gets the sense that the women became active in getting the Mexican government to respond to their needs. It’s an interesting look at the activism of women in Mexico that has not been examined to this day, particularly during World War II.”

For Gamboa, this book represents work that he wanted to continue after the publication of his first book, but a lot of other pursuits intervened in the meantime. For example, Gamboa has been at work on an oral history project in the Yakima Valley, which has been developed with AES students in Chicano Studies who have assisted him in building an archive of interviews with residents of the Yakima Valley from 1930 to 1960. He has also been heavily involved in the development of the Sea Mar Latino Museum and Cultural Center, which is set to open in 2017. On top of all of this, Gamboa spent considerable time putting together a portfolio of his scholarship, teaching and service to the community last year and was awarded with a promotion to full professor in American Ethnic Studies at the beginning of Fall Quarter 2016.

Looking ahead, Gamboa is considering a project that will reframe and reexamine narratives of people from the smaller communities in the Yakima Valley such as Wapato and Toppenish. He is interested in the lives of people from these communities during World War II and their contributions both at home and abroad in the war effort. “When you look at the history of the Pacific Northwest,” Gamboa opines, “if you are astute, you find Mexican people looking back at you at every point of Pacific Northwest history. Not just in the war, but in everyday life. I want to capture that history.”