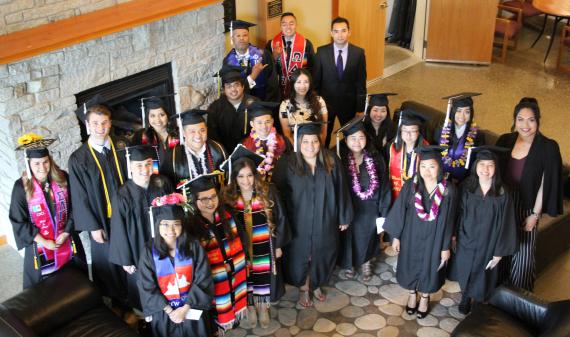 On June 9, AES faculty, staff, students—along with their family and friends—gathered in the Mountaineers Program Center to confer diplomas and celebrate the achievements of the Class of 2017. This year, AES conferred diplomas to 54 students. After a welcome by department Chair, Professor Juan Guerra, the crowd was greeted by a keynote address from Professor Erasmo Gamboa, who retired at the end of the 2016-2017 academic year.

Gamboa, who has been a professor of Chicano Studies for 33 years, described his experience in the department and congratulated students on their work and contributions to the campus community. Gamboa described his own upbringing in the Yakima Valley and his experiences as a student and scholar at the university. In his remarks, he urged AES graduates to use their education to make their mark: “Stand on the side of justice. Join the scores of noble men and women, graduates of this university who are engaged in the struggle for decency and for fairness for everyone.” Gamboa also called on the group of assembled students to engage in social action: “Work to build the class of 2017 into a truly transformative generation. It can be done. No time is the need greater.” The keynote served as a testament to Gamboa’s engagement with and commitment to the many AES students he has worked with over the years.

After the keynote address, Professor Lauro Flores led several AES students in honoring Gamboa for his service and contributions to the department. Flores, who has known Gamboa for most of his career, spoke at length about Gamboa’s outstanding work with students in the classroom and beyond, as well as his commitment to the public good and his highly acclaimed scholarship.

As part of the graduation ceremony, Guerra also welcomed several graduating students, each of whom gave brief remarks about their experiences during their tenure as AES undergraduates. Student speakers Richard Durden, Kel Juan, Brandi Li, and Eugene Sanchez each in turn took the opportunity to discuss the critical roles that faculty, family, community, and peers play in the education and lives of AES graduates. Afterwards, Professors Rick Bonus and Sonnet Retman conferred degrees upon the new graduates, while the rest of the faculty lined up at the front of the auditorium to personally congratulate each of the members of the class of 2017.

We are all very proud of the class of 2017’s many accomplishments and look forward to hearing about their many adventures as they take a step into the next phase of their lives. Congratulations to each and every one of you, and best of luck with all of your future endeavors!

Congratulations to our graduates!