A Blueprint for FASA Community 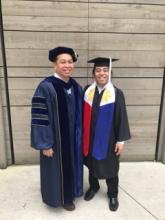 In Fall Quarter 2016, Professor Rick Bonus was approached by a group of students in his AES 360 course on Critical Filipino American History. The group of AES students—John Robyn Buenavista, Bryttnii Cariaso, Jelwyn Agbayani, Megan DeMorse, and RJ Dumo—were all interested in doing an independent study to help contribute to the upcoming centennial anniversary of the founding of the Filipino American Students Association (FASA) at the UW. Before long, this small group of students began to pursue collective and collaborative research that will eventually connect with activities that will help commemorate this event during the 2017-2018 school year.

Instead of a traditional research project, Bonus was interested in giving students the opportunity to bridge their classroom work and research interests with the work they already planned to contribute to their campus communities. Bonus explains, “Students work so hard for their organizations. I admire them so much for doing these things on their own time. Why not give them credit for doing that work?”

The group independent study took place during Winter Quarter 2017 and included a total of 5 students who had taken AES 360 together in the autumn and were involved in FASA as leaders or members. Per Bonus’ expectations, students set the terms for the organization and the goals of the independent study. In this case, students set out to develop the organic goal of connecting classroom work to their work outside of the classroom.

Bryttnii Cariaso, a Linguistics major who is also minoring in Diversity and American Sign Language, explained how the students from the independent study group were able to take up the goals outlined by their work as FASA members. Because FASA had already developed goals for the centennial events, students took up those events and created blueprints for FASA to follow in their planning and preparation over the next year. As Cariaso explained it, “These ‘blueprints’ would aim to provide a guideline with tips and resources that would help the event or project chair with getting started on their volunteer work. Each of the research projects would be at least four pages long and would include an introduction with an objective for the event/project, a list of elements necessary for the preparations, and logistics on resources and material that may be needed.”

Students met as a group once a week early in the quarter. As the quarter progressed, the student group started calling themselves the BFC—Bonus’ Filipino Children. In their work, students prepared materials that will help to set up the work that FASA will do with their kick-off BBQ event for the centennial, as well as the centennial Gala that will be held next year. Beyond helping support the multifaceted planning of these public events, students in the independent study also provided blueprint support for a documentary video series and a proposal for a campus landmark that would serve as a visual representation of FASA’s history.

Cariaso explained that through their work in the independent study, multiple students took up leadership positions in FASA. Cariaso is now a Centennial advisory board member, and two members of the study group are now chairs in the Video Series and Visual Representation of History projects. According to Cariaso, “Doing this research was more productive for me in a study group than if I were to do this by myself. And especially with students who were not only my friends, but ones who shared the same end goal for our project.”

Megan DeMorse, who intends to major in Human Centered Design and Engineering, is now working on the Visual Representation of History project for the Centennial advisory board, even though during the independent study she focused on brainstorming ideas for the kickoff event. For her, the independent study, and her continued involvement in FASA and the centennial planning, were key to celebrating the impact of the association on campus. “For any of the events that will come out of Centennial,” DeMorse notes, “I would hope that it represents Filipino culture, pride, and unity. To the UW in general, I would want any visitor to understand the importance of the 100 standing years of Filipino Americans being present at the University of Washington and to see the cultural pride from the events. So much has happened in 100 years, and I want FASA members to understand the depth of what that means. Centennial serves as a celebration of Filipinx history, the culture, the legacy left by those before us, and the growth to come beyond those 100 years.”

Read more about the work of FASA here: