A Memorable Day of Remembrance 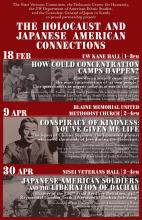 Poster for Day of Remembrance Event

In February, AES professors emeriti were active in organizing a Day of Remembrance event on the UW campus. The event, titled “How Could Concentration Camps Happen?,” was held in Kane Hall on the seventy-fifth anniversary of the signing of Executive Order 9066, which allowed for the incarceration of Japanese Americans in internment camps during World War II. AES professors emeriti Gail Nomura, Stephen Sumida, and Tetsuden Kashima were heavily involved in continuing their legacy of holding events commemorating this history at the University of Washington.

Presenters at the event included Dee Simon, the Baral Family Executive Director of the Holocaust Center for Humanity, and Dr. Tetsuden Kashima, Professor Emeritus of American Ethnic Studies at the University of Washington. Professor Lorraine Bannal of Seattle University compared the two events in connection with acts of mass incarceration taking place today.

The Day of Remembrance event was one of three events held over the course of the spring involving AES professors emeriti working with the Holocaust Center for Humanity, the Nisei Veterans Committee, and the Consulate General of Japan. Two April events explored the impact of the Japanese Consul Chiune Sugihara and the 522nd Field Artillery Battalion. Both events focused on the contributions of the Japanese community to liberation during World War II.

In particular, as Nomura explains, these events provided an opportunity for students, faculty, and members of the public to focus on asking what conditions exist in the present moment which parallel the historical factors of the 1940s that contributed to the internment of these oppressed groups. In Nomura’s view, the series of events addressed a critical question that everyone must always remember to ask, “Is there a way that we can learn from those lessons, both good and bad, and do something more positive in this time of great anxiety?”