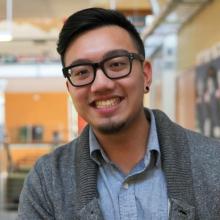 In March, AES major Nicolas Khamphilom was recognized as a member of the prestigious cohort of the Husky 100. The Husky 100 is a university award that recognizes both undergraduate and graduate students from across the Bothell, Tacoma, and Seattle campuses. Students recognized for the Husky 100 award are honored because they “actively connect what happens inside and outside of the classroom and apply what they learn to make a difference on campus, in their communities, and for the future.”

Khamphilom, who is a double major in AES and Speech & Hearing Sciences, with a minor in Anthropology and Diversity, is incredibly involved in the UW campus. Khamphilom started his time at the UW thinking he might pursue a career in Medical Anthropology. However, between his personal experiences and community focused goals, Khamphilom eventually entered the world of American Ethnic Studies and Speech and Hearing. Khamphilom explains that he went to speech therapy in elementary school for a speech confusion disorder. At a young age, Khamphilom became aware of the discrepancies of cultural competency that exist in speech and hearing therapy services for young people who are multilingual and multicultural. “Coming from the Laotian community in Seattle,” Khamphilom explained, “it’s hard to see a lot of Lao kids fall off the path. I’m wanting to help create a more inclusive link between health equity and education. That's what’s driven my passion the last few years—finding that link.”

Khamphilom’s work in AES is what has given him the tools to explore this link through course work focusing on historical reasoning and contemporary issues for Asian Americans, particularly through the work he’s done that focuses on Laotian history. Khamphilom noted that he is particularly grateful to AES lecturer, Dr. Connie So. His work in her classes reflected the “first time I ever heard my own history in a classroom—hearing names that I’d heard before in my family.”

Last fall, Khamphilom was able to go with So’s study abroad program to China where he became a member of the first generation of his family to travel in China in over a century. Khamphilom thought that it “was cool to see where diaspora comes from—to see where our ancestors had left and to learn the reasons why they left. It was really interesting to see where my ancestors left—sensing that connection even though it's been over a hundred years.” Because she got to know Khamphilom after he took several classes with her, So was glad to support him in his application for the Husky 100 award, describing him as “intelligent, caring, and passionate about social justice.”

Khamphilom has worked as a Freshman Interest Group (FIG) leader, as well as a student ambassador for the Office of Multicultural Affairs and Diversity. Crucially for him, he has recently worked the front desk at the Samuel E. Kelley Ethnic Cultural Center. Khamphilom beams that “I love this job, it brings out the best in me, just helping students find the Husky experience.”

The Husky 100 Award means so much to Khamphilom because he is invested and grateful to the UW community. For him, this honor is proof that his passion and dedication has been acknowledged by the community that he belongs to: “People at the UW and in my community saying good job means a lot to me. It’s been a very humbling experience. I feel like my work has been acknowledged, what I’m doing in the community. I just want my community to know that I’ve been working for them.”

Learn more about the Husky 100 Here