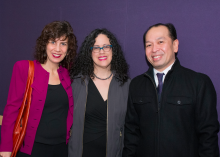 As Professor Bonus explains, “It was important to have a group of faculty attend an event that honored the legacies and accomplishments of black students on campus. I imagine it is nice for students to see an entire table of instructors that do black studies and are allies.” In particular, Professor Bonus is excited to see the ways that AES faculty like Sisay are helping to bridge the relationship between faculty and student activist organizations on campus.

Sisay actually received his undergraduate degree in American Ethnic Studies in 2011 and is now a lecturer in the department while he finishes his PhD in African American and African Diaspora Studies at the University of California Berkeley. In his time as a lecturer in African American Studies, Sisay has worked to maintain relationships with students and support the work that they do. In recalling his undergraduate years, Sisay had this to say: “I see a lot of myself in those students, especially after having navigated the university so recently. I also find community in the BSU and recognize the value of having faculty mentors connected to folks doing work that I could be doing.”

As a matter of fact, Sisay sees himself building on the model of engagement established for him by Bonus when he was a student in this very same department. The work to support student activism, while still stepping back and making sure students keep their own space, is a shared value within the American Ethnic Studies department. “I was encouraged,” Sisay remarks, “to see students leading that conversation on their own. I was there, sat back and listened, and offered my own encouragement.”