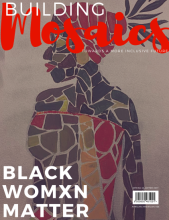 The cover of a zine project created by AFRAM 498 students.

During Spring Quarter 2017, Professor La TaSha Levy offered a course on the Black Lives Matter movement for an engaged student community. Because it is a nascent movement, Professor Levy believes that the Black Lives Matter community and message is often mischaracterized in a way that provides a strong pedagogical incentive for an intervention through course work in her class. As Levy explains, there is a distinct disconnect between people’s perception of the movement and the actual action involved. In particular, she sees that there has been a specific narrative that has been played out in the media and that has been embraced and appropriated in many ways. In her view, few people understand what the organization is and where it started.

In the course, Levy is working to help students identify aspects of the movement “beyond sound bites that you might hear in the news.” After teaching a short version of this class before, AFRAM 498 in the Spring has enabled her to teach a course that contextualizes the movement and focuses on the scholarship and activism that explains the work being done by Black Lives Matter. Although Levy describes multiple difficulties with teaching a course so relevant to our contemporary political and social climate, there is nothing so distressing as the ongoing list of names and public acts of police violence that have become integrated into student course work. Levy admits to the difficulty of engaging new murders and acquittals being covered in the news as the quarters went on. However, the current nature of the Black Lives Matter project has also enabled students to craft responses that regain agency for themselves as students and for their communities of belonging.

For their final projects, students developed an educational resource with a public bent. By taking up the work that they read in class, students were able to bridge their classroom work with the work that must still be done in the community. Levy described the work of students in the classrooms as particularly focused on social media: “They’ve a strong sense of looking at how social media creates networks that were impossible in earlier generations.” Because of this, at least one group focused their educational resource on an Instagram account that Levy explains will “emphasize the celebration of black children alongside advocacy. They’re going to offer resources for parents who want to talk about police violence but also want to balance it with joy and celebration.” Other groups have worked on developing playlists of artists commenting on the experiences of state violence in the US. Levy was also excited to describe the work of a feminist zine that focuses on the mothers of the movement: black women and black trans women.

Levy explains that because she was born in Washington D.C. and has lived on the East Coast for much of life, her students have offered her an insight into the distinct experiences of students of color in the Northwest and in the Seattle community. “This is a new environment where I am learning a different kind of dynamic about how race gets played out,” she notes. “So this class creates a space, even outside the classroom, for students to process that. I’ve been trying to observe and pick things up from them and understand their perspective and what might be helpful.” Through their projects, some student members from the Seattle area have been able to connect their course work to local issues such as gentrification in South Seattle and the current project of halting progress on a youth jail. These specific issues have also formed the crux of another group’s final project for the course.

Looking ahead, Levy hopes to build on the work she’s done in this class by offering another course in the future that focuses specifically on the historical roots of the Black Lives Matter movement. Everyone in AES looks forward to what Professor Levy has to offer AES students in future courses.