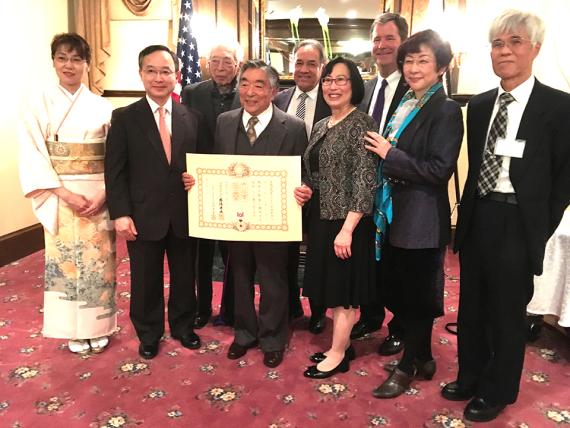 Dr. Tetsuden Kashima, Professor Emeritus of American Ethnic Studies at the University of Washington, was presented with the Order of the Rising Sun, Gold Rays with Rosette by the government of Japan. Yoichiro Yamada, Consul General of Japan, honored Kashima with the award at an intimate reception at the Consul’s residence on March 9. Consul General Yamada cited the valuable work Kashima accomplished throughout his career. The reception was attended by several faculty members including Jeffrey M. Riedinger, Vice Provost for Global Affairs, and Lauro H. Flores, Professor of American Ethnic Studies.

Kashima was born in Oakland, California. As an infant, he and his family were forced into internment at the Tanforan Assembly Center and the Topaz War Relocation Authority camp until 1945. A long-time resident of California, he received his BA from the University of California at Berkeley and his PhD in Sociology from the University of California at San Diego. Kashima began his academic career at the University of Washington in 1976 as Director of the Asian American Studies Program. The program later became part of the Department of American Ethnic Studies after the Asian American Studies Program, the African American Studies Program and the Center for Chicano Studies merged in 1985.  He is renowned for his work in Asian American studies and sociology, specializing in the field of Japanese American internment and incarceration during World War II, as well as Japanese American values and interpersonal relations and religion.

An accomplished writer and guest speaker at several universities in the United States and Japan, Kashima founded the annual UW Day of Remembrance ceremonies commemorating the once auspicious signing of Executive Order #9066 by President Franklin D. Roosevelt on February 19, 1942. The EO9066 authorized the removal of almost all persons of Japanese ancestry from four West Coast states into American concentration camps. The EO9066 was the legal justification used to intern more than 120,000 Japanese and Japanese Americans after the start of World War II, including Kashima and his family.

In 2008, Kashima directed the special UW Day of Remembrance celebration, “Long Journey Home.”  The event sought to right the wrong of 449 UW students whose college education was unjustly interrupted due to the now infamous signing of EO9066. UW Nisei students were ceremoniously presented (some posthumously) with honorary baccalaureate degrees from the UW Board of Regents and former UW President Mark Emmert. This is just one of many endeavors that exemplifies Kashima's achievements.

The evening was sublime with the traditional passing of the Order of the Rising Sun to the raising of saké honoring him. In his closing comments, Kashima humbly stated, “I am proud of my Japanese heritage and proud to be an American.” AES is very proud of Dr. Kashima, too. In an announcement to the department, Dr. Juan Guerra, AES Chair, said, “As I’m sure you’ll all agree, it’s a well-deserved honor in light of his many contributions over the years to the advancement of Japanese and Japanese Americans in the United States as a scholar, educator and community member.”