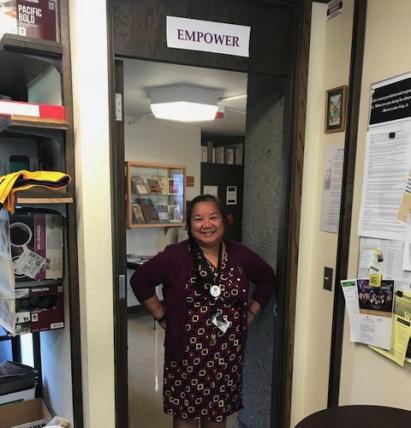 Lorna Hamill in her AES office.

Lorna Hamill has her dream job. As she explains it: “When I ask my students what they see themselves doing, I think, hey, this is what I see myself doing—working with these students."

Hamill took on the role of Academic Counselor for American Ethnic Studies at the beginning of Autumn 2017. In 2018, she also became the adviser for the Diversity Minor at UW, a new task she gladly took on because it gave her an opportunity to work with even more students. An AES graduate herself, Hamill says, “I’m very proud and very happy to be here.”

Hamill was born in Seattle and started her education at the University of Washington in 1977. In her first experience at the university, Hamill moved from major to major—first music, then psychology, then sociology, with stops in Speech and Hearing Sciences along the way. None of these courses of study quite fit. Hamill eventually dropped out of the UW altogether and began working as an analyst for Airborne Express.

Eventually, Hamill started taking community college classes. She took a class here and there until she earned her AA. In 2009, she started taking courses at the UW again. It was then that her Educational Opportunity Program academic adviser Linda Ando directed her toward American Ethnic Studies. “AES was a perfect fit for me,” Hamill recalls. “I wanted to work in communities and with students; I wanted to break down barriers toward education.”

Hamill earned her bachelor's degree in American Ethnic Studies in 2012. As she recalls, every class in AES was an eye-opener: “They were teaching things they don't teach you in public schools. When I look at the surrounding American culture, people didn't learn enough about the history of the oppressed. This history was something new that we were all learning in our AES classes.” Once she became an academic adviser for AES, it all came together for her: “I saw that it’s really important that people pursued the AES major or Diversity minor. If a student takes any of the AES core classes, that will excite their thoughts about how they identify and the pride they have for their identity.”

After working in other positions at the UW, Hamill finally had her chance to come back to AES last year and the AES department was thrilled to have her back. “It’s been magical ever since. I can’t tell you how amazing it is to see students, work with them, see their passion, help them succeed, even when it’s rough. Whatever I can do to help them, it’s an honor,” Hamill declares, “because I’m included in their pathway to personal success. When they leave my office, they are empowered.”