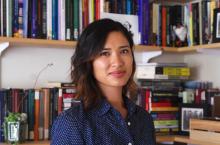 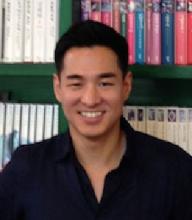 In Autumn 2017, AES welcomed two new professors to the teaching faculty: Dr. Linh Nguyễn and Dr. Jang Wook Huh. At the end of their first year in the AES community, both professors have had a chance to look back on their experiences with their own scholarship and teaching in the department.

Nguyễn, who was raised in Escondido, California, received bachelor’s degrees in Women's Studies and Spanish from the University of California at Santa Barbara in 2008 before completing her PhD in Ethnic Studies at the same institution in 2016.

In Winter 2018, Nguyễn taught a course on Asian American and Pacific Islander women. In Spring 2018, she was able to introduce her own course on comparative studies of refugees in the United States. Because student enrollment was low, Nguyễn treated it as a sort of graduate seminar. Nguyễn explains: “The course is brand new. I’ve never taught it before, but my work touches on the disciplinary differences between history and memory. We’re looking at the power dynamics of what gets archived and what gets forgotten through all the different lenses of power in American ethnic studies. We’re considering who gets to produce knowledge and whose knowledge is validated.” She’s been impressed with her experiences with students so far: “UW students are demanding and prepared. They’re keeping me on my toes. They seem really motivated, and it’s been really fun teaching them.”

In her scholarship, Nguyễn is currently working on a book proposal about domestic violence in refugee families. She notes that the stakes of this work have been rearticulated for her through her engagement with the community in AES and in Seattle: “The direction of it hasn't changed much, but I’m thinking more and more about how important the conversations are to the local community. I’ve been talking to people in Seattle more about what the Vietnamese community wants, about how people want to have a conversation about that history but they don’t have the platform to do that. I’m trying to help get the conversation going.”

Beyond the classroom, Nguyễn has enjoyed Seattle and claims that the rain hasn’t gotten to her yet. She’s enjoyed exploring the city with her dog, Clementine. Nguyễn has also had the chance to engage with the larger Seattle and UW community through her connections with the Southeast Asian Center and her mentorship of the Vietnamese Student Association, both at the UW.

Dr. Huh received his PhD in English and Comparative Literature at Columbia University and wrote a dissertation that focuses on Afro-Korean connections in literature. Huh is originally from Seoul, South Korea where he attended Seoul National University. Huh started off Winter 2018 by teaching a large lecture course in Comparative Ethnic Literature. In this large course, he got to collaborate with TAs in a class that he tried to make as discussion based as possible. Luckily, according to Huh, ”students raised a lot of questions and thankfully my students raised their hands and very actively participated in class discussion.” With a smile he adds, “It was really good.”

In Spring 2018, Huh taught courses on Asian American literature and Asian American Theater. In his syllabus, he includes a nod to AES Professor Emeritus Stephen Sumida. But he’s also making this class his own. For the final, students will have the opportunity to perform some scenes from plays read in the course. As Huh explains, “We should train ourselves to see and read and hear visual texts as well. Reading is one thing, performing is another.”

Huh is working to make progress on his ongoing book project, which focuses on the intersections between African Americans and Korean Americans in the mid-twentieth century. The environment in AES has buoyed his work. He explains: “I could not have expected better. My colleagues are so warm and so supportive. I really like the collegiality and the intimacy between faculty members.” Beyond campus, Huh has enjoyed exploring the local food and theater scene. In fact, his exploration of the food scene has reflected a lot of his thinking in the classroom about culture: “I like Seattle a lot, the urban sensibilities and nature. And the food scene is really great. I like to talk about the relationship between food and books in the way that they celebrate and sustain life. The funny thing about food is that is that it’s related to the consumption of culture—it’s a great way to understand different cultures.”