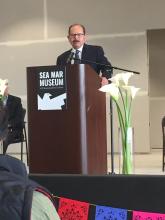 In Spring 2018, AES faculty, staff and students were invited to a sneak preview of the Sea Mar Museum of Chicano/a Latino/a Culture. The 10 million dollar building under construction in the South Park neighborhood was developed with the support of Sea Mar Community Health Centers, the Washington State Department of Commerce, the Washington State Historical Society, the King County 4Culture and JP Morgan Chase Foundation. Erasmo Gamboa, AES Professor Emeritus, has been working as consultant on the project from its inception.

As the first museum of its kind in the Pacific Northwest, the museum will use a social justice lens to “showcase the history of Chicano/as and Latino/as from post war immigration to the present time.” With a particular focus on migrant farmworkers and the Chicano Civil Rights Movement, the museum brings together historical artifacts and art to tell the story of the development of Chicano/a and Latino/a communities in the Pacific Northwest.

The more than 200 guests who attended the sneak preview were treated to the music of a mariachi band, welcome addresses by Governor Jay Inslee, Rogelio Riojas, CEO and director of the Sea Mar Community Health Centers, and Dr. Gamboa. Each of them spoke about the important contributions that the museum will make to Seattle and the larger Pacific Northwest community. Guests were also entertained by a group of children from nearby Concord Elementary School who sang, spoke and rejoiced in finally having a museum that will address their families’ histories.

The museum is still seeking community support in developing their archive. As the story of Pacific Northwest Chicano/as and Latino/as is vastly underrepresented and still emerging, the museum has solicited public input of photographs, diaries or other records, and/or artifacts including household items, work tools or clothes from Pacific Northwest Chicano/as and Latino/as. If you by any chance have access to any of the aforementioned items, please contact us at aes@uw.edu so that we can put you in touch with Dr. Gamboa. Those of you who would like to learn more about the early history of Chicano/as and Latino/as in the Pacific Northwest may be interested in Gamboa’s most recent book, Bracero Railroaders: The Forgotten World War II Story of Mexican Workers in the U.S. West, which is now available in paperback.