Being an “American” in an International Airport 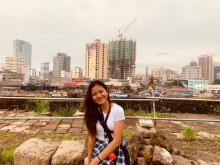 Upon arriving at the Manila International Airport, I was about to cross the immigration booth when the officer there asked me, “Where’s your passport?” I quickly handed him my USCIS (United States Citizenship and Immigration Services) Refugee Travel Document. Confused and anxious, I looked over at the other side for perhaps a hint of help -- toward my study abroad professor and the rest of my cohort who were waiting in line. My family and I fled Myanmar as refugees when I was around eight years old. We went to Malaysia. Fleeing Myanmar due to persecution and discrimination brought about by colonization and militarilization, the next chapter of our lives depended upon the UNHCR (United Nations High Commissioner for Refugee) whose task was to assign us a country to resettle to. Whether it was going to be the United States, Canada, Norway, Australia, or anywhere else that’s not Myanmar, one thing was clear and simple: we wanted a better life.

Maybe “simple” is not actually as simple as it sounds now, as we sought for a new life that will let us dream and prosper regardless of our ethnicity, race, gender, religion, socioeconomic status, or other forms of social construction that would perpetuate the very obstacles that we ran away from. In Malaysia, the years flew by quickly. I was young and eagerly attended an informal refugee school. After more than four years of residing in an overcrowded apartment where we lived with other Chin families -- an ethnic minority group in Myanmar that I am a part of -- my family was notified by the UNHCR of our new resettlement location: Washington, USA. As if winning a lottery ticket, we were very happy, yet bewildered. We’ve neither heard of Seattle, nor did we have a lot of close relatives there.

Upon our arrival in SeaTac by the end of 2011, we became Permanent Residents in our new home, “the land of the free!” But still, to this day, I continue to question my “Americanness.” Just like how the immigration officer questioned me. I still feel perplexed by my in-between state of belongingness and I am unsure about the idea of having a “home.” How does one define being an American? What is required to declare one’s “Americanness?” Looking back at that scene where I briefly got detained at the airport, as a participant in an AES study abroad program last early Fall of 2019, I was called a “stateless person.” This incident amplified my feelings of ambiguity regarding how “American” I am, or not.

Whenever I talk about my refugee status with strangers or even with acquaintances, I often observe the sudden shifting of their eyes, as if they want to pity me. Having internalized what many call as impostor syndrome, these reactions cause me emotional burden, and perhaps even trigger some unspoken traumas. Many times, I long for “normalcy,” as if I can tell what that is. Well, I do know that I am different.

Fear seems to be a common theme for most of my life. From my parents and grandparents, I’ve heard stories of fear due to poverty. That’s why they’ve worked hard so that I never have to experience being poor. I’ve also personally experienced fear, in the over-policing of immigrants in Malaysia. Refugees always fear being detained or deported. True, I had moments of joy along the way, but I remember being scared on the day I started middle school as a resettled refugee. I could still vividly remember walking to the school bus stop, seeing a blonde boy there who was probably going to be my classmate, nervously greeting the bus driver who was a White woman. I recall stepping outside to face the entrance of my school. I can see myself walking into my very first classroom. Fear was with me throughout my primary public education.

Eventually, like a chameleon, I learned English and tried to assimilate myself into my surroundings. My perseverance and hard work led to great accomplishments, as measured by the top grades I got. But fear continued to follow me as a first-generation college student, even in a great university. What I felt at the airport was this same fear. As if it’s attached to the back of my head, fear constantly reminds me of my insecurities. As a result, there are many times when I get confused between feeling like a successful person and feeling like a victim, especially because my family and I have internalized the pains of systemic racism and oppression in order to survive.

Pursuing higher education has made me unpack the myths of the so-called “American Dream.” “It’s a paradox,” said one of my AES professors. It is often invoked to make people subscribe to the “bootstraps'' model, the idea that one must climb the social ladder on their own to achieve social mobility. But it is also used to justify the oppression of self and others. Indeed, I’ve noticed how this model is practiced by my parents. They hustle and toil through hard work at minimum wage to feed our family, pay our bills, and put some savings aside. They often discourage eating out or doing “fun” activities, and they’re always grateful to God for having adequate food and shelter. But I know, deep inside, that they also have unspoken pains and dark issues regarding their physical and mental health. These struggles are often ignored and normalized. But, the fact that they’re now suffering the negative consequences of following their American dream makes me question the pursuit of that dream.

Perhaps, we all need to confront our tendencies to be “stateless.” We should be more vocal about advocating for our social needs, for authentic representation, and voice. This year, 2020, has opened up many “unstated” wounds brought about by the global pandemic as well as the uprising of groups fighting against racial injustice. In my case, by taking AES courses, I have learned about the sad repetitions of the histories of oppression that have been hidden from us. How does one treat a wound without seeing it? We’ve also learned about the different ways in which intersectionality and allyship occur in fighting for social justice. After all, AES was founded through radical movements and protests led by students of color. AES has taught me many ways to recognize myself as an asset, not a deficit who is ruled by fear. And now, as I’m wrapping up my last year at UW, I look forward to continuing the process of finding my own ways to be “stated,” through actions that will empower not only myself but also our communities.