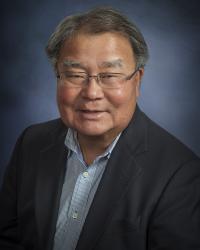 Prior to returning to the University of Washington where he earned his Ph.D. in English in 1982, Stephen H. Sumida taught in the Department of English Language and Literature and Program in American Culture at the University of Michigan (1990-1998), the Departments of Comparative American Cultures and English and the American Studies Program at Washington State University (1981-1990), and the English and American Studies Departments of the University of Hawaii (1970-1980). He committed his scholarship and teaching to Asian American literary studies in 1975, when he became the coordinator of the Pacific Northwest Asian American Writers' Conference, held at the University of Washington in 1976. He went on to be a co-founder of Talk Story Inc., a cultural organization for developing research, creativity, and study in Hawaii's literature and arts. This activity continues today in Hawai'i. From 1986 to 1990 Sumida was a member and chair of the Committee on the Literatures and Languages of America, of the Modern Language Association of America, where scholars in Native American, African American, Chicano/a, Puerto Rican, and Asian/Pacific American literatures, were among the first to construct a view of a multicultural American literature. Sumida went on to serve as President of the Association for Asian American Studies and the American Studies Association. In 2007-2008 he was awarded a Fulbright Professorship to teach in Tokyo, at the distinguished Tsuda College and Tokyo Institute of Technology. He has participated in American Studies projects and given lectures widely around the world, in tune with his American Studies Association presidential themes of a respect for international scholarship in the field and constant attention to how internationalism and US ethnic studies impact each other. In 2011 Sumida has been honored with the James Dolliver Visiting Professorship in the Humanities at the University of Puget Sound.

Stephen Sumida's recent stage acting credits include roles in the theatrical adaptation of Jamie Ford's novel, Hotel on the Corner of Bitter and Sweet, and in Nikki Nojima Louis's Breaking the Silence, performed in Hiroshima during Peace Memorial Week, August 2013.