In a Yellow Tone, An AAS 380 Production 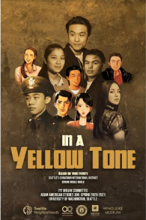 Students from American Ethnic Studies AAS 380 ventured into producing a brilliant graphic novella honoring Chinese, Japanese and Filipino American Congressional gold medalists of World II. Their efforts, under the leadership of Professor Connie So, resulted in the release of In A Yellow Tone, 2021. The story follows fictional students Cyman Wong and Collette Chang who discovered letters, photographs, and mementos from Cyman’s great-uncle and the trials he endured after returning home from the war.

Filming for the AAS 380 movie began in Winter 2019. It was initially proposed by students who had worked on a previous AES project celebrating Golden Spike Day. Along with AES, the students partnered and received support from the Seattle Neighborhoods, OCA Asian Pacific Advocates of Greater Seattle, Chinese American Citizens Alliance, and Wing Luke Museum. However, with rising health-risks and concern for exposure to COVID-19, the movie format was cancelled. Students quickly reviewed their options for production and switched from a movie format to create a beautifully artistic graphic novella.

The students resubmitted their grant and by early 2021, received permission from the City of Seattle to produce a book. While many AES students contributed to the making of the film, the key contributors for the book became a committee of 8, comprised of mostly AES students: Editors: Han Eckelberg, ’21; Johnny Do, ’19. Design team: Maeson Dewey, ’22; Wen Eckelberg, ’24; Brooklyn Hose, ’24; Caroline Natsuhara, ‘22; Heidi Tandiono, ‘24 and Tommy Tran, ’22.

AAS 380 students were able to celebrate the book release with a party August 8th at the Rainier Arts Center. An in-person and live stream of the event was made available on YouTube and viewed by more than 300 people. At the book reading event, students sang songs relevant to the book, and included a lion dance to celebrate their amazing accomplishment. There are some first edition copies of the book still available. They can be purchased at ocaseattle.org. All purchases benefit the OCA-GS internship program.