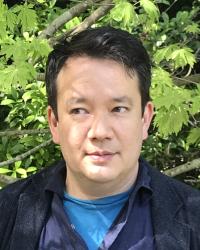 A fourth-generation Japanese American, Vince Schleitwiler was raised in Chicago's Rogers Park neighborhood, and currently makes his home in Seattle’s Beacon Hill. His first book, Strange Fruit of the Black Pacific: Imperialism's Racial Justice and Its Fugitives, explores the intersecting migrations of Japanese Americans, Filipinos, and African Americans across US imperial domains, from the 1890s to the 1940s. His scholarship has appeared in African American Review, Amerasia Journal, Global Performance Studies, Film Quarterly, Comparative Literature, and others. Current research projects include a second monograph, “From Afro-Asia to Outer Space: Racial Difference Beyond White Supremacy,” and coediting a recovered phototext manuscript on post-WWII Japanese American Chicago by the photojournalist Vince Tajiri. Interviews and dialogues on his research have appeared with Black Agenda Report, Imagine Otherwise, the Center for Art+Thought, and South Side Projections.

As a public scholar, Schleitwiler has collaborated with artist Rea Tajiri on “Wataridori: Birds of Passage,” a May 2018 multisite public installation on Japanese American resettlement in Philadelphia, and composed a serial essay for the installation brochure. He has served as an editor, researcher, consultant, and writer on public history projects for organizations including Densho, the Washington Trust for Historic Preservation, the Washington State Historical Society and the State Legislature's Oral History Project, the Fenimore Art Museum, and the Seattle JACL, and was a Scholar-in-Residence at the Center for Art+Thought, for which he composed a set of serial essays, City of Refuge.

He is a frequent contributor to Seattle’s International Examiner, and his article on a Wing Luke Museum exhibition was honored in the 2017 Northwest Excellence in Journalism awards. His writing has also appeared in the Village Voice, FILMMAKER, South Seattle Emerald, Crosscut, The Margins, and elsewhere, and he began his journalism career in high school as a weekly movie reviewer for the Chicago Tribune. He also worked as an arts consultant and as an indie film development executive prior to receiving his MA and PhD in English at the UW.

Before returning to UW, he taught in English and Africana studies at Williams College and American studies and ethnic studies at the University of Southern California.